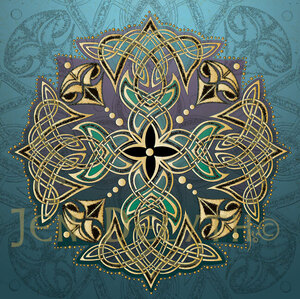 The Divine Warrior who protects the tribe and is glorified for his great endurance and courage exists in all heroic societies. For the Celts, tribal honor is extremely important, and in mythology warriors become heroes and gain entrance to the Otherworld through mystical hunts of treacherous supernatural creatures such as The Red Swine of Derbrenn. The Celts claim their decent from a divine ancestor. Nuada of the Silver Arm was a prophet and champion, and King of Ireland and of the Irish Gods, the Tuatha Dé Danaan. His fearsome killing sword Claíomh Solais, the Sword of Light was one of the great treasures of Ireland. In Welsh mythology, Nuada is also known as Nudd and is a hero of the medieval tales. He is also associated with Nodens and Mars, the Roman God of War and healing who was also revered by the British Celts. Tribal Warriors often went naked into battle, adorned with heavy golden torcs, golden belts and armbands. Their hair was bleached white with lime water and spiked in course tufts. Some were bearded and others clean-shaven or wore bushy moustaches. They were distinctive and fierce looking, unafraid of death upon the battlefield as they fought for the glory of the spoil, for their hero’s honor. Their warrior culture, inspired by the teaching of the Druids that their souls were immortal and the Otherworld awaited them, expanded throughout Europe, Britain and Ireland, infusing their myths with a bloody passion for legendary battles between the gods.
Artwork and Text by Jen Delyth ©2003