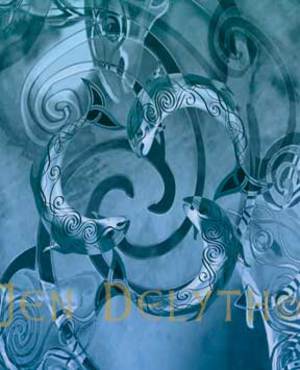 Rivers full of Wild Salmon once ran clear to the oceans, waters that were unrestrained and unpolluted. The salmon make profound journeys. From their humble beginnings in freshwater rivers, they journey far to the oceans, adapting to the salty waters and transforming into fish of the sea. The mature salmon then swim upstream – a heroic effort, struggling against the rugged rapids and waterfalls to spawn – and then die in the place of their birth. The Salmon are the wise, sacred fish of the Celts, associated with the Aois Dana, the Poets of Ireland. Large, powerful and embodying the fertile golden glow of the Sun in their flesh, inspirational in their courage and knowledge, the salmon are honored as sacred symbols of wisdom. The wisest and oldest of all the animals was the salmon of Llyn Llyw. "I am a salmon in a pool", reads Amergin’s poem. In the Welsh myth Taliesin the wise Poet was fished from the salmon weir. In the Irish version, Finn acquires wisdom and the gift of prophecy from the Salmon of Knowledge.
Original Design and Text by Jen Delyth ©2000