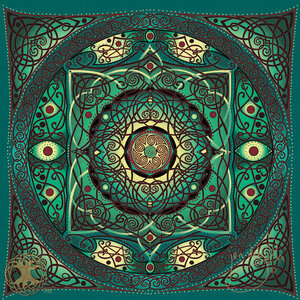 AN DÀ SHEALLADH - Second Sight - the Gaelic term means "the two sights", and refers to the inner "seeing" into the spirit world, as well as our normal sight into the everyday world. Also known as Imbas Forosnai - the gift of clairvoyance or the visionary practices of the seer poets of ancient Ireland. In Old Irish, Imbas is the inspiration of the Fili (the poets). Forosnai means illumination, including prophecy and poetic insight into the invisible world that lies within and without. In Celtic tradition, the special gift of the “Second Sight” was both respected and sometimes feared, and was thought to run in families, being seen as both a blessing and a curse. In this design, the interconnection and weaving of the interlacing patterns reaching out from the central spiraling life force - represent the complexities of life in all its forms, with the eye motifs reminding us to look deeper inside and without, to glimpse the deeper truths. The tiny dots symbolize a fluid open "boundary", between this world and the otherworld.