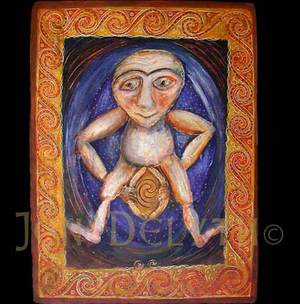 Remembered in Ireland as the Old Woman Creatress who gave birth to all races of men, Sheela- na-gigs are curious stone figures found in Irish, Scottish, English and French medieval churches and castles.  Often represented as a contorted, nude squatting female figure, holding open her genitals, she is usually displayed above doors, windows and entrance ways, often located on keystone blocks.  Local people call her a Sheela - na- gig - from the Irish Sighle na gCioch meaning ‘the old hag of the breasts’.  Her role is as controversal as her appearance. One possible ancient belief is that the displaying of genitalia would oppose evil and repel enemies, just as the women of the pagan Celtic period did to subdue the male warriors of the Tain and other sagas.  Another suggests that She was intended to ward off danger.  As protector and nurturer of life force, she is certainly a powerful symbol. I see Sheela as sacred Crone, the wise woman who holds the power of passage, the mysteries of Death and Rebirth, through the symbol of the Yoni as gateway.  A strong and primal symbol of female energy,  Sheela probably connects back to the powerful ancient Celtic Goddesses, and has continued to resonate in folk memory as an important figure, despite being labeled obscene in later, more prudish, times.  Certainly most of the stone figures of Sheela-na-gig were destroyed or defaced due to fear of female sexuality.  Sheela balances the sacred and the profane as one, gateway to the ultimate mystery of life and death and rebirth.
Original Design & Text by Jen Delyth ©2000