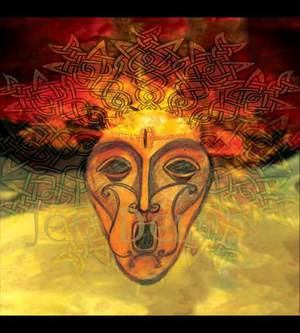 The Fire in the Head is found in a line from the ancient poem The Song of Amergin from the Book of Invasions, 1500 BC. Shaman-poet Amergin says, “I created the Fire in the Head”. The fire in the head represents a bardic flash of illumination, of ideas and inspiration that are both intellectual and spiritual. As poet, Amergin brings the fire of inspiration into form, and as shaman he brings fire as a spiritual force to illuminate the mind, the psyche. The human head was a potent symbol for the Celts. The head with the sun bursting through the crown represents Awen- spiritual and creative illumination flowing upward to the heavens through the mystical power circle of the torc, the Celtic ring worn at the throat.
Artwork and Text by Jen Delyth  ©2007