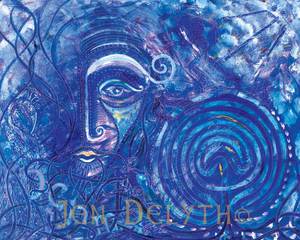 Oghma - or Ogma/Ogmios -  is Patron of the Bards, the Celtic God of Language, Literature and Eloquence, and of Ideas and Knowledge.  Oghma is often depicted with chains connecting his tongue to the ears of his followers - who are slaves to his eloquence.  In this painting, the vines of the Tree of Life and Knowledge connect Oghma to his subjects, who bow their heads in humility, whilst dancing within the realm of the Bard. Awen is the Welsh word for “poetic” inspiration. The mark of Awen (three dots with three lines) represents this divine inspiration of the Poets. The Labyrinth represents the sevenfold path of knowldge. The Celtic Shaman used a Crane Skin bag to carry his Ogham tools - here the sacred bird represents the Mysteries of the Eloquence of the Bard. Oghma is originally one of the Tuatha De Dannan Irish Gods -  also known as Cermait, which means `honey-mouthed` or Grainainech, meaning `sunny-faced`. The Welsh figure Euuyd who is related to Oghma, is mentioned in the ancient Welsh texts Llyfr Taliesin, and the Mabinogi, probably relating to a lost tradition of Euuyd. Oghma is credited with the invention of the Celtic writing system Ogham.
Original Design and Text by Jen Delyth ©2010