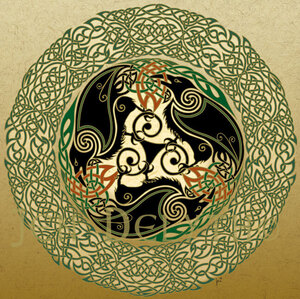 The Raven is the totemic bird of the Morrigan - Great Queen, also known as Badb, Crow - the ancient Celtic death goddess of victory, prophecy and battle. In Arthurian myth she appears as Morgan Le Faye, King Arthur's witch half-sister, as a powerful and dark influence. The Morrigan ruled the Fortunate Isles with her nine sisters who are said to guard and tend the cauldron of rebirth in the depths of Annwn, cooling it with their breath. Ravens have a close affinity with the supernatural world, and appear often throughout Celtic mythology, featuring in the Welsh stories of the Mabinogi. Ravens are birds of omen - predicting the future by studying the flight of birds. Believed to possess oracular powers, the distinctive harsh voice of the Raven prophesied the future and the outcome of battles. Carrion birds, they are associated with death, and Celtic coins depict the Raven or Crow perched on the back of a horse, symbolizing the war-goddess Badb Catha, who could change shape from woman to death-crow in battle. The Triple Raven alights on Cu Chulainn's shoulder at his death,to symbolize the passing of his spirit. As death is closely intertwined with life, the bright-eyed Raven is also blessed with clear vision, and is wise in the mysteries of rebirth and healing. Original Design & Text by Jen Delyth ©1998