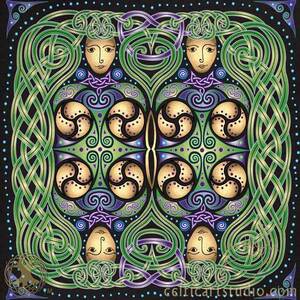 The Celtic Priests or Druids were healers, poets, astronomers, magicians, and astrologers, overseeing the rituals and laws of the tribes. Women held positions of power and respect in Celtic society, and although most of their names remain forgotten, Irish mythology tells us of the Ban-Draoithe, Ban-draoidh, or the Bandruí - the female Druids of the Celts.

In the Táin Bó Cúailnge Fedelm boasts the skill of Imbas forosnai - gift of clairvoyance and illuminating knowledge. She prophesies the fate of the armies of Queen Medb against the Ulaid and their greatest champion, Cú Chulainn. Queen Boudicca - queen of the British Celtic Iceni tribe, was daughter of a Bandruí, and before she attacked the Romans, Boudica released a hare from the fold of her tunic to divine the outcome of the battle, invoking Andraste - the Iceni Goddess.

Tlachgta is a great Ban-Draoithe who came to Ireland with the Firbolgs, long before the Tuatha De Dannan and Milesians. Ancient goddess of the sun and of lightning, her name means “earth spear” - (in Old Irish - tlacht “earth”, gae “spear”)

Tlachgta is full of light and energy, known for her wisdom, and magical secrets. She travels with her father - the chief Irish Druid Mog Roith, discovering the sacred stones of Forcarthu and the pillar of Cnamchaill, that is is said “to kill all who touch it, blind those that gaze upon it and deafen those that hear it” (lightning). Tlachgta also creates a great rolling flying wheel (the sun).

She becomes pregnant on Imbolc (February 2nd - the Celtic festival marking the beginning of spring), and leaves these three sacred objects behind in the East, coming to a great hill in Ireland to give birth to three sons - Doirb, Cumma and Muach. On Samhain, (October 31st-Nov1st - marking the end of the Harvest, and beginning of the dark time of winter) - Tlachgta dies in childbirth, giving her life, name and power to the land, and is buried on the hill that is named for her - the Hill of Tlachtga (now known as the Hill of Ward). The Hill of Tlachtga became the sacred place of druids, and at Samhain, the first sacred fires in Ireland were lit - ensuring light against the growing darkness of winter.