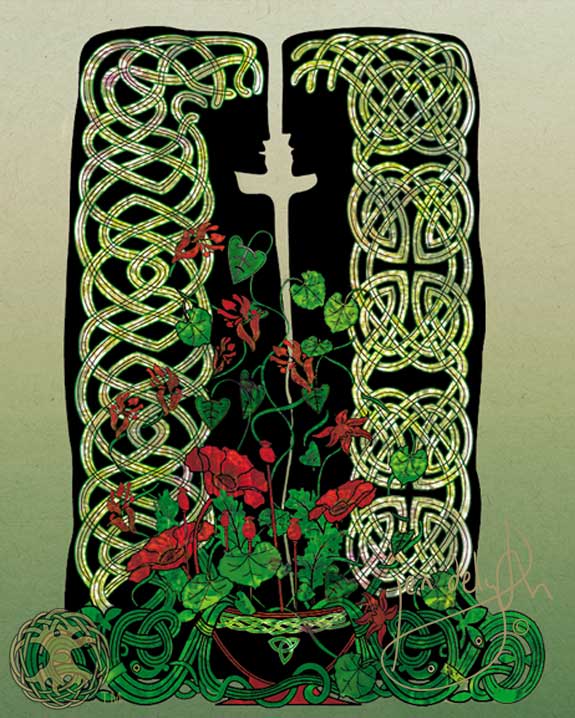 SPIRIT IN STONE
Duffryn, near St. Nicholas in the Vale of Glamorgan, has Druidical stones scattered about in various places. Some of these have stories attached to them. Old people in the beginning of the nineteenth century said that once a year, on Midsummer Eve, the stones in Maes-y-felin Field whirled round three times, and made curtsies; and if anybody went to them on Hallowe'en, and whispered a wish in good faith, it would be obtained.

The great cromlech in the Duffryn Woods was an unlucky place to sleep in on one of the 'three spirit nights' for the person who did so would die, go raving mad, or become a poet.

On a certain day in the year the dancing-stones of Stackpool were said to meet and come down to Sais's Ford to dance. If anybody witnessed this performance, it meant exceptional good luck to him. The witches held their revels and the devil played the flute occasionally around the dancing stones.
On the summit and sides of Cefn Carn Cavall, a mountain near Builth, in Breconshire, there are several carns scattered here and there. It is said that King Arthur when hunting the swine named Twrch Trwyth, Cavall his favorite dog impressed the stone with his footprint. The warrior king collected a heap of stones together and on the top he placed the curiously marked one, and called the mountain Carn Cavall.
Among the mountains called The Rivals in North Wales, is the beetling and furrowed Craig Ddu, with its almost black rocky surface and inaccessible sides rising sheer against the sky.
In the eighteenth century people said that the apparition of an old man with long white hair and flowing beard used formerly to be seen wandering down the valley, and pausing to mutter unknown words beside the Craig Ddu.
Sounds of strange music were heard, and magic signs were made by the old man. If anybody fell asleep in the shadow of Craig Ddu he would sleep for ever, and be carried away by unseen hands so that his resting place could not be known.
Marie Trevelyan, Folk-Lore and Folk-Stories of Wales, 1909
FINE ART PRINT HERE