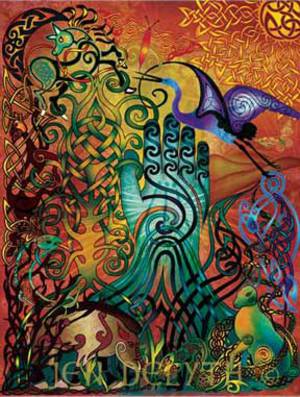 The Fire of Life burns within the heart of the seed. The dry husk contains the dormant force waiting to be sparked into green life in the warm womb of the earth. The humble seed scatters, to fall on stony ground or fertile soil.


Seed contains the great dream of being. Seed dreams of opening, becoming itself â a flower, a man, a great tree, an ancient poem that takes root in a future time.

The Poet nurtures the germinating seeds of insight called to life by the fire of inspiration and illuminated by the fertile sun of the intellect. This esoteric fire is known as Awen to the Druids â it is the creative spark of life.

The Celtic Folk-Soul is forged by this transforming element of fire. Dormant seeds sown by the ancient storytellers, poets and artists are brought to flower by the fire within â others may be destined to open in another time than this.

This is the creative process honored by the Celts, who understood that the Arts were close to the Mysteries of Life and gave their bards the highest respect and mythic honor.

Brighid Keeper of the Flame is daughter of the Dagda, the great god of Irish mythology, the ancient protector of the tribe. She is also a revered Christian saint and pagan goddess of healing, poetry, smith-craft and midwifery. At her monastery in Kildare, women took turns guarding and feeding the holy fire, keeping an eternal flame in the spiritual hearth.

Brighid is the smithy â patron of craftsmen and poets. Honored by metal-workers, whose intricately wrought gold, silver, copper and iron were so favored by the Celts, as midwife she is mistress of the forge of life itself.

Salty oceans are the ancient blood of the world. The primeval seas, as the waters of the womb, are the source of life. One of the most ancient archetypal elements, water is considered a powerful female symbol representing dreams and the unconscious, the intuitive aspects of our psyche.

Water is one of the four root elements of matter. Water flows downward to the earth, is the realm of the fish and of life beneath the surface, and cleanses our spirit and is the sea from which we are born.

Though much has been lost, some beautiful folklore and invocations have been collected over the last centuries, drawing upon the oral memory of those whose daily lives were intrinsically connected with the ebbs and flows of the coastal seasons.

The first fishermen wove their nets and baskets along the rocky shores. The women collected cockles and mussels from the rich estuary mudflats, gathered tangled black seaweeds to dry in the sun and made their rich lava breads as is still done in south Wales today. Their songs, stories and blessings invoke the sea and the elements â their prayers woven throughout their everyday lives with the rhythm of the tides upon their shores. 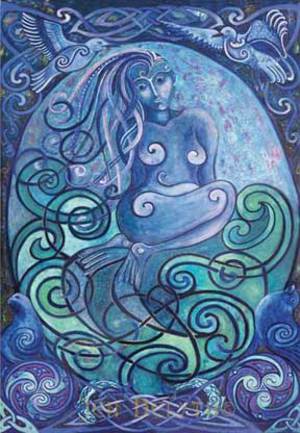 The life of the Islander was one of faith and hardship, with spirit and prayer central to enduring a challenging existence of living with the uncertainties of the stormy elements. The Atlantic Ocean is a vast green brine of secrets. All-powerful, the waters often claim the lives of the folk, and the small settlements of the storm-battered coastline are sometimes taken back by the salty sea.