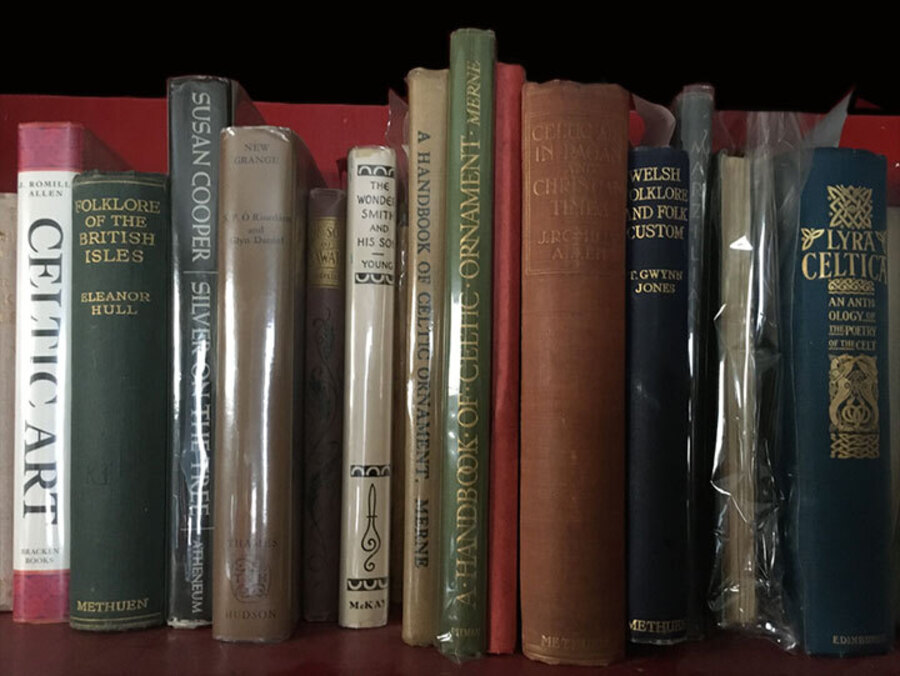 I love old books… and of course, as an artist and writer, I have a modest library. I enjoy collecting some early original print editions of my favorite Celtic art, poetry and mythology books.

I took this picture today of a small area of my book shelf - the books called to me for some reason - and I decided to write a little about my secret passion in collecting a few early printing editions (when I can find them reasonably priced - which is half the challenge and fun), and many other artists and writers since their publications at the end of the 19th, beginning of the 20th century.

It began when I was carefully researching authentic source material for my book “Celtic Folk Soul - art, myth and symbol” (now in its second edition!) I started collecting a few precious early first pressings of some of my favorite books, published at the turn of the century, printed in the days of letterpress and tipped in plates, with deckled edge paper, foxed and spotted and tinged with brown spots from years of surviving their journey through our shelves and lives. 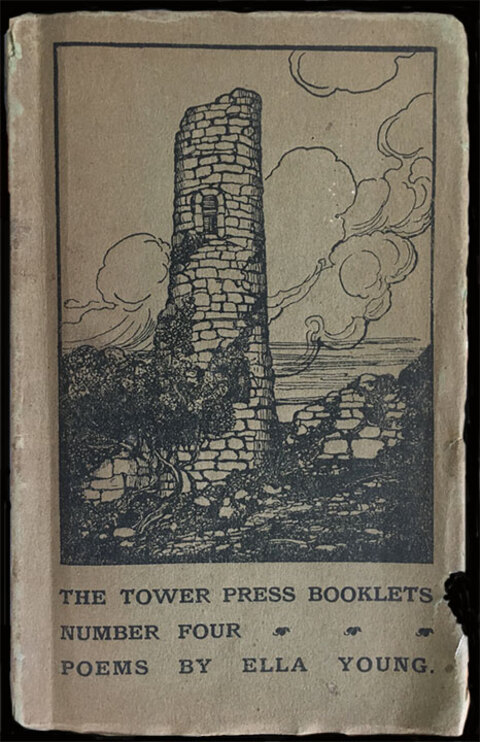 Books printed on real paper, with real ink, using metal plates, letter press type, with well oiled printing presses pushing their metal plates into cotton and linen fibre paper, books from the times before information - well researched or not - can be found with a simple google search the internet.

But back to the old books!

My books - my humble library - live in my studio, and I see them every day as I walk past them. They sometimes call to me, as they did today.

Some of these early books are classic texts, that I turned to when writing my book “Celtic Folk Soul - art, myth and symbol” - now in its second edition! These source books have inspired many of us working in the Celtic field - and have often been republished in affordable paperbacks ever since. But the reproductions do not have the quality of illustration, or the presence of an actual metal plate illustration book. My books often include the name of the original owner - written in ink with a careful flourished hand. A precious few of them are signed and dated by the author - a most special find for sure!

One of my well used favorites, is Lyra Celtica - an “Anthology of Celtic Poetry”, edited by William Sharp and J. Matthay. 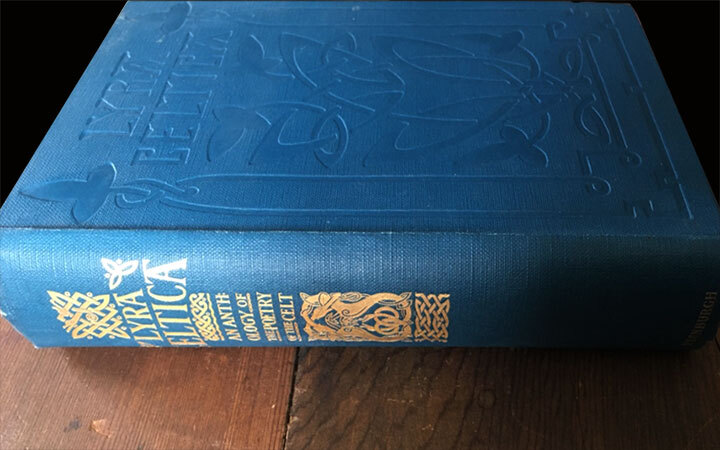 First published in 1896, my cherished second edition was published in 1924 by John Grant - Edinburgh, 31 George IV Bridge (I love seeing the old addresses of the printers and publishers too!). This book is a beauty. And its full of post-it-notes - used, loved - not kept as an object on a shelf. 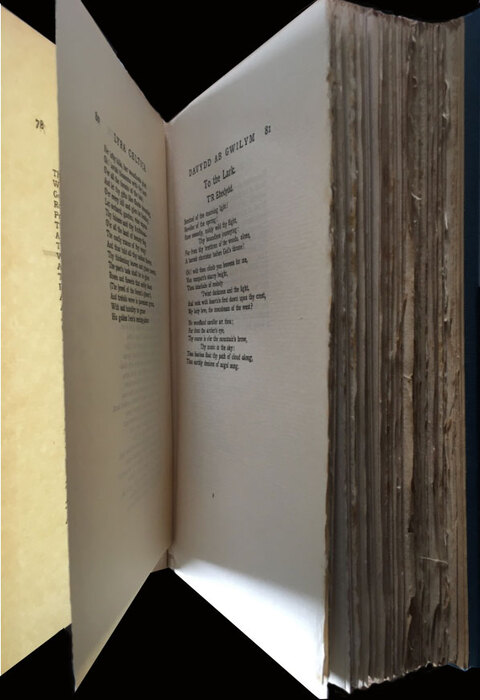 The pages would have been “uncut” when sold, the groups of sewn in folded paper, and the new owner would have to run something like a slim metal knife through the folded pages, creating a deckled edge that is uneven and so very charming - to be able to open up and read the book.

I found some beautiful tiny books by poet/folklorist Fiona MacCleod - from 1907
- that I had to “cut” open the pages that had stayed folded since the 1900s… I struggled with the decision to keep them intact, but unreadable - and decided to experience being that first person since 1907 to unlock the written word upon the old paper inside the little book. I also have a few other copies of these charming vellum printed books that remain “uncut”, from 1907/ 1911, published by Thomas B. Mosher, Portland, ME 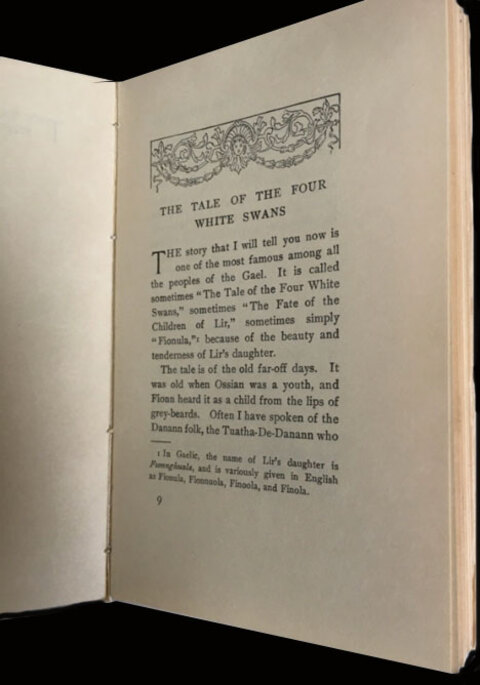 But back to my old books!

My most precious collected first edition is a very rare tiny pamphlet called “The Coming of Lugh” - published in 1909 by Irish mythologist Ella Young - who was active in the Gaelic and Celtic Revival literary movement of the late 19th, early 20th Century. Ella Young was part of a group of writers and artists who had a supporting role in the Easter Uprising. 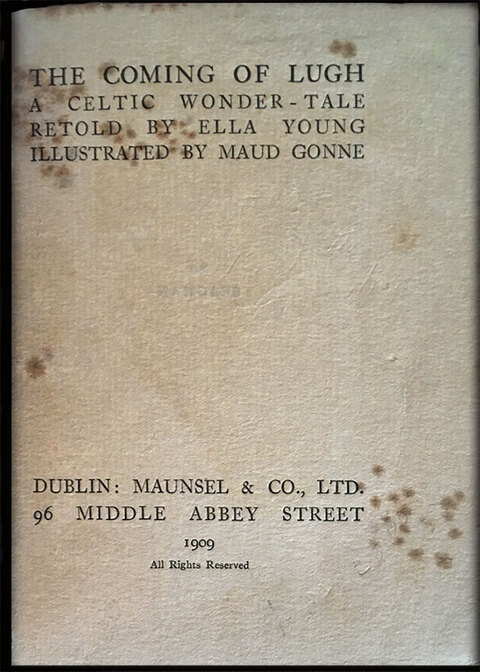 This tiny pamphlet style book tells the story of the Celtic sun god Lugh. It is at its most simple, a children’s tale… but I think it was produced with a stirring revolutionary intent by Ella - published during the Irish rebellion, to inspire the Irish people to rembember their rich cultural history and esteem as a great people, with a great history, that was (attempting to be) repressed.

Of great joy to me, it is simply and beautifully illustrated by her dear sister friend artist Maude Gonne - who was famously the muse of Irish poet William Butler Yeats. They were all part of a circle of revolutionary Irish artists and poets, who used art, theatre, mythology to inspire a cultural revolution in Ireland at the turn of the 1900s.

These charming illustrations are “hand tipped” - colored by hand - so I read - by Maude Gonne herself! Ella Young and Maude Gonne probably touched these books, coloring them in, handing them out. Less than 100 were made.. and I searched for years to find one. I’m not sure how I did in the end! 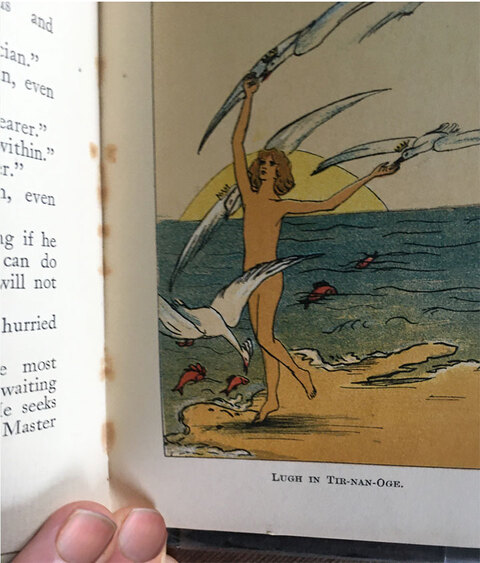 I appreciate Ella Young, both as a writer and as a woman of her time. She was exiled from Ireland for her part in the Easter Uprising, (she smuggled guns for the rebellion underneath her skirt), and she came to live in Northern California. She knew most of the important literary and artistic figures of her time - artists such as Georgia O’Keefe, Ansel Adams, writer Charles Erskine Scott Wood and others. She was sadly never able to return to her home country Ireland again, but she taught Celtic mythology in Berkeley, and continued to write children’s books and poetry.

To my delight, I found a personally signed copy of Ella Young’s book of poetry “Marzilan”, inscribed by her on 14th May 1943 - how precious is that! I also discovered her biography “Flowering Dusk - Things Remembered Accurately and Inaccurately” published in 1945, which is not available as a modern paperback I don’t think. A fascinating story of a woman who kindled awareness and love of her Irish mythic heritage. Ella Young sowed seeds to inspire other generations of artists to the beauty of the old Celtic tales. Including me! 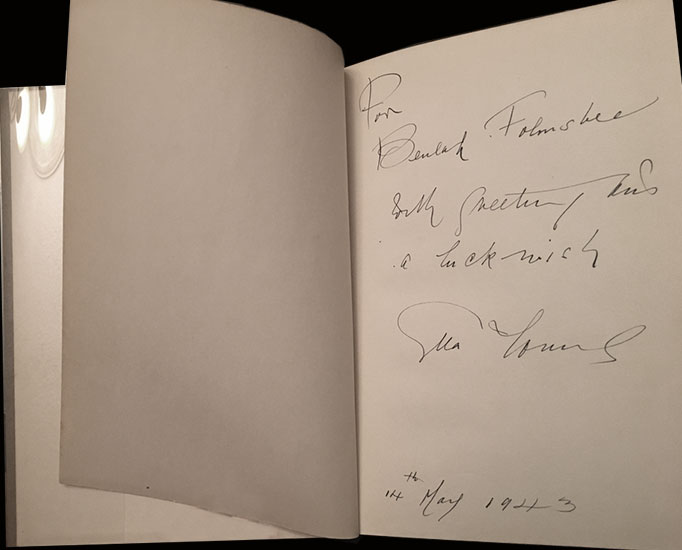