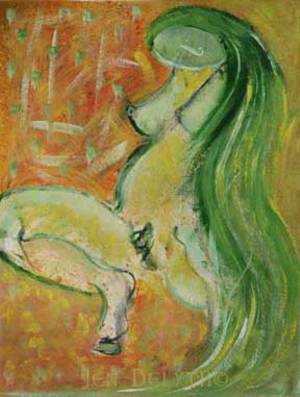 Queen Maeve  - or Medb - whose name means "intoxicating" - was infamous for her beauty  and her sexual prowess.  She lived around the 1st century B.C., and many monuments in Ireland are named after her.  A warrior Queen,  she took many lovers, most of whom were officers in her army which thereby ensured the loyalty of her troops.  She was wild and passionate, bloodthirsty and fierce in battle.  Celtic women were not bound by the confines of monogamy even within marriage.  The men of Connaught were  encouraged  to fight to the death to win her favor - a place in her bed.   Celtic Women enjoyed equality of rights and freedom equalling that of men.  Whoever brought more wealth and property into a marriage was considered the ruler of the household, and the beautiful and passionate Irish Queen Maeve inherited the Sovereignty of the Land of Connaught and ruled her army.  Seeking ultimate power over her husband King Ailill - who had equal wealth to her, she set her heart on the prize of the great Brown Bull of Cooley, creating a great battle resulting in many deaths on both sides  - the legendary Cattle Raid of Cooley (The Táin Bó Cuailnge).
Original Design and Text by Jen Delyth ©2005