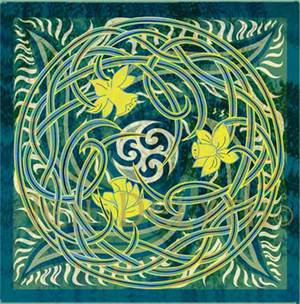 In spring the banks of many Welsh rivers and canals, hills and valleys, are incandescent with the bright yellow flower, Narcissus pseudonarcissus, the wild daffodil, which is the national flower of Wales.  Leeks or Daffodils are traditionally worn upon the lapel on March 1st, marking the beginning of spring in honor of St. David, the patron saint of Wales.  Dewi Sant, was an ascetic monk who helped spread Christianity throughout the pagan Celtic tribes of the area.  The leek has been a symbol of Welsh identity for centuries.  Leeks were also associated with health and medicine. Even today, Welsh soldiers wear leeks in their caps on St. David’s Day.  Daffodils, also containing a green stem and white bulb, are often substituted for the odoriferous leek by many Welsh.  In fact, the Welsh name for the daffodil is cennin Pedr or cenhinen Bedr, Peter’s leek, similar to Leek - cennin.  The beauty of daffodils are immortalized in the poem by Wordsworth, “I wandered lonely as a cloud, That floats on high o’er vales and hills, When all at once I saw a crowd, A host of golden daffodils.”
Original Design and Text by Jen Delyth  ©2002