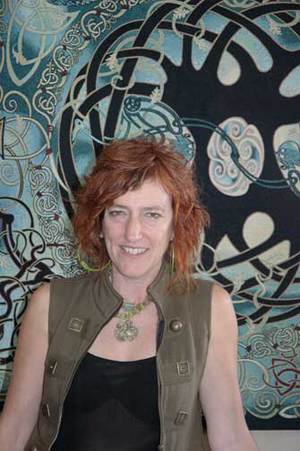 “For me it is the creativity and rhythm, the power of the symbols beneath the work that are most important.”

Welsh artist Jen Delyth is one of the most highly respected contemporary Celtic artists in the world. Her debut book Celtic Folk Soul - Art, Myth & Symbol Celticfolksoul.com illuminates the beauty, power and spirit of nature expressed through the ancient language of Celtic art and symbol: the voice of the Folk-Soul

"You may already be familiar with the artwork of Welsh artist Jen Delyth, who has done more than any others (aside from England's Courtney Davis and original Celtic art revivalist George Bain) to bring the ancient interlace designs, spirals, patterns and imagery of the Celts to modern awareness. As it turns out, Delyth is also an excellent writer and is well steeped in Celtic folk-lore, mythology and mysticism. Her stunning artwork and words vividly express the beauty, power and spirit of nature, as seen from the perspective of Celtic tradition"—Lahri Bond - Dirty Linen Magazine July 2008 www.dirtylinen.com

The Celtic tradition has its own ancient roots back into the cultures of the Neolithic and Paleolithic peoples who came before them. It continues to evolve and is - most important to many working today - a Living Tradition.

Artist Jen Delyth is part of this living tradition. She creates original Celtic paintings and illustrations which explore the language of myth and symbol inspired by Celtic folklore and the spirit within nature. Her work is informed by the folk motifs and symbols of the ancient Celts, but woven through her experience and vision as a woman of the twenty-first century.

Born in the Welsh borderlands of the Wye valley, and raised in the industrial heartlands of south Wales, and a small village on the edge of the Gower Penninsula, Jen Delyth was surrounded by landscapes that have inspired poets and artists throughout the ages. Her childhood was spent exploring the lovely Welsh hills and stunning coastal beaches and coves with her family. This early connection to the natural world has played an integral role in her development as an artist.

Drawing from ancient metaphors and integrating the visual motifs and language of Celtic patterning into original new designs, Jen Delyth finds the symmetry of form and symbol that expresses living archetypes. Her work is stylistically contemporary, iconographic, reflecting spiritual and philosophical roots which embody universal themes that reflect her love of nature and Celtic symbolism.

"I am intrigued by the marriage of old and new, ancient and future. This work is a personal journey into the language of Celtic myth and symbol, the beauty of nature, a simple interpretation of Celtic spirituality expressing the Mystery of the inter-connectedness and balance of all things"

Jen is also founding member of Celtic Art Group Contemporary American Celtic which exhibited on tour across the States 2000, 2007 & 2011